﻿of William A. Handley

THE CIVIL WAR IN ALABAMA

AND THE SCHOOL'S BEST FRIEND
Handley. Found in the names of churches, streets, businesses, and, our school but why?
A look into the life of Captain William Anderson Handley answers that question. 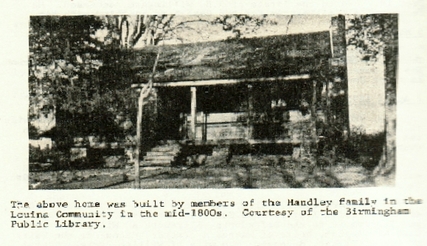 William Anderson Handley is arguably Roanoke’s most prominent citizen, from the year of city’s founding (1832)  until today. He was a clever businessman and entrepreneur who amassed a small fortune, all the while holding steadfastly to the principle of servanthood with his charitable works and philanthropy, especially in the field of education. He was a politician, elected to Congress without solicitation, and served as a U.S. Representative from 1871 to 1873. He was a delegate to the Democratic National Convention in 1876, a state senator in 1888, a delegate to the Alabama Constitutional Convention in 1901, and a state representative in 1907. Many supported him to run for governor, but he chose not to do so. His life was one well-lived and his humble beginnings only add to the awe of his inspirational story.
​
William Anderson Handley was born December 15, 1834 in Liberty Hill (now Glenn), Georgia.  His parents were John Randolph & Nancy Formby Handley; and he was the eldest of their seven children. His family was poor and moved to the lands in Alabama that had recently been vacated by the Native Americans. Their intent was to take advantage of the Randolph County, Alabama gold rush that began around 1840 near Wesobulga (present day Cragford). They did not have any luck in finding gold and so the family tried their hand at farming.​

Sometime between 1845 and 1848, his family moved to Louina (across the Tallapoosa River from present-day Wadley) where he attended school, as one writer said, “as a barefoot boy,” in a small log schoolhouse. Louina was the largest community in Randolph County and a thriving area to seek employment to supplement the family income. At the age of eight, a young William Handley began delivering mail between Louina and Roanoke. Then, as a ten year old, he started working in a store (kept in a big house) that had previously been owned by his uncle and later, his father. The new owner, Mr. Barber, paid young William an annual salary that totalled $50. Years passed and he met and courted Adelia A. Mitchell, daughter of one of Louina’s wealthiest residents, Peter Mitchell. On November 8, 1859, W.A. Handley married Adelia A. Mitchell in Louina and moved to Wesobulga, Randolph County. According to the 1860 census, Handley was a business merchant while living in Blake’s Ferry in Wesobulga. Three short years later, the War Between the States would separate the young couple and put a strain on their efforts to start a family.​

Handley's Service to the confederacy 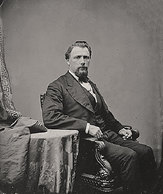 In 1861 Handley joined the Confederate Army in Wetumpka as captain in Company F of the 25th Alabama Infantry. His first duty was in Mobile, Alabama where he guarded the coastal works. Captain W.A. Handley discharged his duty well but suffered with poor health. He was granted a furlough and returned home in July of 1862 to recuperate. Later that year, in November, he returned to his brigade in Tennessee to fight. On December 29, 1862, he was injured in the battle of Stone’s River in Murfreesboro, Tennessee. Because of his injuries, Handley resigned from duty in June of 1863 and went home to Wesobulga. (His brother, Frank took his place and was promoted to Captain of the same regiment.) His store, nor his attempt at farming, were successful.  Handley then became a tax collector for the Confederate Army from 1863 to 1865. The Confederacy had no real funds so Handley’s primary responsibility to assist the troops with supplies. During this time he most assuredly recognized the limitations of the southern states in their lack of manufacturing and ways to ship products efficiently to the battlefields. This would prove to have impact on his later career decisions.

a captain of industry is born

Now in his thirties, Handley borrowed $1,000 and moved with Adelia and their two young children, Lola and Guy, to Roanoke in 1868. They lived in a solitary, large, two story Victorian house overlooking Handley Springs Park and often kept their milk and butter and other items in a spring house to keep them cool. They also used water from the springs for drinking and bathing in their home on the hill. At one time, the city’s water supply came from the same spring; school children, young couples, and clubs would use it for many years as a picnic site. This house later burned, and the family would later rebuild on Main Street.
​
Handley opened a small mercantile store that same year but would close it in 1870 when he was elected to Congress. He bought his old business back after his Congressional service and opened Moore, Manley, and Handley. The store sold dry goods, hardware, shoes, clothing, sewing machines, insurance, tobacco, and equipment for cotton farming. After eight years, the business was reorganized as the larger and more prosperous Manley, Handley, and Hornsby in 1879. It was the first brick store in Roanoke on Main Street. Hill, Hardy, and Company built a store adjoining the Handley house. Bill Ussery of High Shoals ran the Handley Hotel on the second floor.  Even though business interests would take him away from time to time, he would make Roanoke his permanent home from that time until his death.​

Handley's contribution to the growth of birmingham

In 1882, Handley borrowed $3,000 and went into business with one of his “boarders” James. D. Moore, a former teacher at the Roanoke Institute. The latter’s brother, Benjamin F. Moore, also a teacher, would join the two men briefly in forming a wholesale hardware business called Moore, Moore, and Handley in the city that would later be dubbed the Magic City because of its rapid growth. That city, of course, was Birmingham. That same year, Handley built a house on North Main Street. Moore-Handley Hardware (as the company became in 1888) eventually became a chain of hardware stores over the next several decades and was one of the most profitable hardware businesses in the Southeast. All the while, Handley made real estate purchases in Birmingham, Roanoke, and other parts of the state with hopes to earn a tidy return in his investments. The three businessmen also purchased a hotel called the Metropolitan Hotel in Birmingham. It burned in 1884; they had it rebuilt and sold it for $175,000. An article in the Birmingham Age Herald in 1896 credits Handley with several Birmingham enterprises and as “one of the main factors in the building up of this city.” Handley also owned 677 acres of farmland in Handley, Texas (named for his brother, James.)

andley had a deep love for the city of Roanoke, its citizens, and its youth in particular. In 1879, he gave an interview to the paper where he proclaimed that Roanoke was a “school town.”  His generosity ensured that the city’s young people would have a quality education. He remembered the deplorable conditions in which he attended school and did not want other students to be forced to learn under those same conditions. He gave $6,000 dollars in 1874 for the Roanoke Institute, and when it burned, he donated money for the Roanoke Normal College to be built. (It was completed in 1892.) He even chipped in extra money when construction costs ran over. Moreover, he offered 20 “lots” (plots of land) to those who would consider moving to Roanoke and teaching here. The Handley Schools (Handley High and, originally, Handley Elementary, which later changed to Handley Middle) were named in his honor because he donated the land in 1907 to the city of Roanoke for the schools’ use. The school system has remained an integral part for the city and boasts thousands of successful students who have graduated under the Handley banner.​

handley's influence with the railroad

In 1887, Handley, already an influential businessman and statesman, became a key figure in getting the Central of Georgia Railway extended from Opelika to Roanoke. He will later (1906) be appointed to the Board of Directors of the Atlanta, Birmingham, and Atlantic Railroad and was invited to drive the first spike as the railroad crossed into Alabama in 1907. The railroads entrance into Randolph County will be of tremendous importance to farmers. Previously, farmers in the county had to get their product to market by mule and wagon. The railroad would also be instrumental in the success of Handley’s next business venture.

In 1900, W.A. Handley led Roanoke into the 20th century and established its reputation as an industrial town. He and four other men- Z.J Wright, W.H Knight, R.L Schuessler, and Major Schuessler filed papers to incorporate a cotton mill within the city limits. They raised $100,000 from local investors, and purchased 35 acres of land. Handley donated the other 40 acres and the mill was named the W.A. Handley Manufacturing Company in his honor because of this action. He was also selected as the first president of Handley Mills. The mill would run (with slowdowns and halts) from its opening on Oct. 1, 1901 until 1972. It employed many of Roanoke’s citizens and provided a sense of community for those who lived in the “mill village.” The workers of the mill at first lived rent-free, then later paid 15 cents per week per room, then 25 cents, and finally 50 cents as their pay increased. In later years they would purchase their homes outright.

Handley was a follower of Andrew Carnegie’s Gospel of Wealth. Not only did he give generously to education, he gave the first $100 to build a convalescent home for aging veterans of the Civil War. He also donated land for area churches to build their houses of worship, including the United Methodist Church, the Episcopal Church, several churches in the mill village, and the First Baptist Church. While he had always been a man of faith, he was not baptized until the First Baptist Church opened in 1901. After Thanksgiving service, after the prayer, the minister asked if anyone wanted to speak. Handley rose and stated, “I don’t have anything to say, but if you open the doors to the church, I will join.” The  City of Roanoke’s webpage even said that “Roanoke’s most celebrated citizen was the first baptized there.”

A LIFE WELL-LIVED COMES TO AN END 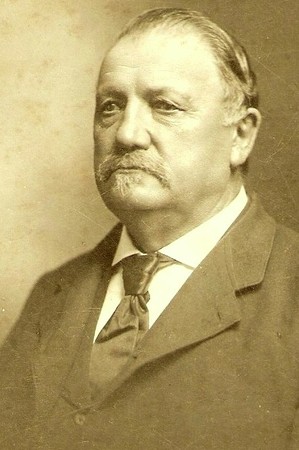 W. A. Handley passed away June 23, 1909, at the age of seventy-four after suffering a fall earlier in the month which dislocated his shoulder. His health had been in failing for quite some time. Handley left behind half a million dollars and no will. He had penned a letter in 1908, written on W.A. Handley Manufacturing Company stationary, expressing his wish that his estate be divided among his children. His funeral was widely attended by members of the community, the state house, and, appropriately, children from the school he so lovingly supported. Church bells across the city, the school bell at the college, along with the mournful whistle of the mill, sounded as the funeral began, acting in a chorus of respect and admiration for Roanoke’s most prominent citizen.
An editorial tribute from The Roanoke Leader said: “Striking characteristics of our deceased fellow-citizen were his love and loyalty towards his town and county, his affection for his comrades of the Confederacy, his catholicity of spirit concerning church creeds, and his devotion to the cause of education. These were manifested in many practical ways through a long and active career.” A life well-lived is the most honorable legacy one can leave. Like his tombstone reads, William Anderson Handley was truly was a “country developer, a city builder, a patron of learning, and the school’s best friend.” ​